I never thought that the old Splasher’s location was a bad one – in fact, I liked the small size of it and  the barstools that faced the seawall on Alii Drive.  It was a great spot to duck in and have a quick fish taco or just a basket of crispy fries by yourself or with a friend.  The only table seating used to be on a small lanai just above the sidewalk’s busy foot-traffic and was enveloped by lush plantings so that you could feel as if you were sitting at a trendy sidewalk café.

For some odd reason, most restaurants seem to want to expand just when things are going really well for them.   They have a steady clientele and it’s not just all touristas off the boat.  I generally avoid visiting the newer and larger establishments because it’s like visiting a traffic jam in a foreign country – crazy.

Knowing that the new and improved Splasher’s moved to the old Paleo (and former site of lots of other failed attempts at eateries and bars), I called ahead to find out if they validate at the King Kam.  Surprise- they offered free parking in the small lot just below the building on the south side (I have always known about that one, but getting in and out in an SUV is tricky-Dick to say the least).  The other lesser known free parking spot is at the Kona Seaside (small hotel on the corner of Palani and Kuakini, just above Quinn’s).  If you stay on the lower side of the lot, ignore the “TOW AWAY” and “NO TRESPASSING” formidable  looking signs and know that you are safe parking there.  Upon quizzing our waitress about that location, she revealed that the hotel security marks the tires in the lot.  If the car is still there after about 3 or 4 hours, they call Splasher’s with a list of license plates and the staff will try to locate the corresponding owners (probably firmly anchored to their barstool after 4 hours – or at paddling practice off the pier).

After sprinting up the building’s steep (be careful!) stairway, I had to elbow my way through the crush at the hostess’ desk.  Getting a few dirty looks and passing one man with a partially opened mouth as he was no doubt about to reprimand me for cutting in line, I waved to no one in particular to indicate that I had a place to sit.  After my eyes adjusted to the glare, I did finally see the girls, who were seated at a primo lanai table facing the ocean, and under cover.

Late as usual (why, why, why??), I hastily ordered an iced tea from our jovial waitress, Becky.  Besides the day’s specials, Becky also informed us that a woman at the farmer’s market (next to the library) makes earrings such as the ones that she wore that day, since we inquired about them.

The uncommon earrings held our attention for awhile, and then the topic switched to a gift bag for none other than  “Moi“.  Since they noticed that I had reverted to note taking on the back of deposit slips and checks for the blog, the Babes invested in an Italian Leatherette journal with acid-free papers to last for all eternity, should the WordPress site go down.  “Think, create, record-with style”.  I am deeply appreciative, and promise not to use it for grocery lists and other such mundane things.

The table conversation somehow veered to the nasty subject  of polygamy and became quite energetic.  During a very animated exchange of thoughts on that topic, a cute (and obviously not a polygamist) waiter tried to refill our glasses while one of the girls instructed him to disregard our cacklefest, and I heard him anxiously reply (with a grin)  “I’m paying deep attention!”. The poor guy will probably go home after work and fire his girlfriend.

how many ways can you say "polygamy"?

We did finally order food and frankly, it was hard to choose from such a large and colorful menu.   Happily, the Babes were not disappointed with our meals.

Mei’s fresh Ono Fish and Chips at $12.99 were lightly panko breaded and deep fried.  She instructed Becky to make sure the fries were crisp and hot!  And surprise – they were!  The ono was not overcooked, but when you deep fry fish, be prepared for some dryness.  It will not resemble a moist sauté no matter how you prepare yourself. 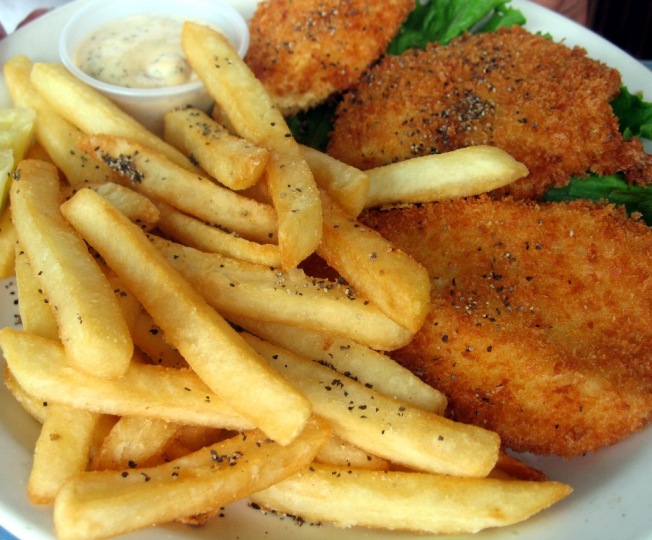 Terri chose the Bacon Pepperjack Burger for $9.95- fairly self-explanatory with lotsa bacon and spicy pepperjack cheese on a one-half pound burger made of Angus Beef (all of the Big Kahuna Burgers are this style).  All burgers come with a choice of fries, salad or seasoned waffle fries.  Fortunately, she went with the waffle fries, which looked terrific.

Carolyn’s preference today was the Splasher’s Hardy Dip for $9.99- described on the menu as “a pile of roast beef, grilled onions and mushrooms served up on a fresh baked hoagie roll with savory au jus and swiss cheese”.  It appeared exactly as written up-and more.  She chose the rings as the accompaniment and apparently enjoyed her lunch thoroughly as we didn’t hear a peep out of her for 30 minutes.

I just couldn’t decide with all the choices so passed my ordering opportunity to Cindy, who probably knew what she wanted before she got to the restaurant.  The Ortega Volcano Burger  (who the heck thinks up these names anyway?  I want that job!)  for $9.99 served with pepperjack cheese, mildly-spicy Ortega chiles and grilled onions were delivered with homemade Beer-battered Onion Rings, an extra option for an additional $1.50. The onion rings came highly recommended by the cheery staff, and Cindy, who has already feasted at Splashers a few times, so it wasn’t a hard choice for me.

My gigantic serving of Spicy Grilled Jalapeno Burger ($10.99)arrived with the huge wheel-shaped onion rings.  I could see specks of pepper in the batter and they were hot and crispy besides!  I wasn’t prepared for the spicyness of the grilled jalapenos (loads of them) hiding under an ocean of melted cheddar.  As a matter of fact, I think I meant to order the South of the Border Burger with avocado, cheddar and their fire-roasted salsa, but as I usually do with big menus, picked one that was similar sounding just to get an order out.  After inhaling  a gallon of iced tea ($2.15), the cute waiter thankfully returned to refill my glass.  My eyeballs complete with spouting  steam vents were probably bulging out of their sockets at that point. I noticed on the menu (too late) that you can order your hamburger cooked the way you like it, otherwise, they are all grilled to medium-well.   Despite the fire-cleared sinus and the overcooked meat (to my liking), I enjoyed the meal and would definitely return to try that other item.

Our Becky and the cute waiter were constantly checking that all of our needs were fulfilled.  (The waiter was probably scared to death of us after the polygamy conversation).  At one point, another woman came over to see if everything was great, and we learned that she and her husband own the restaurant.  I noticed that Inde was working right alongside the others and obviously takes great pride with her establishment.  And I noticed that the staff was unusually pleasant, smiling, and appeared happy to be at their jobs- how delightfully refreshing!!!

As I looked around, I saw that Splasher’s was packed, tables were moving, and there was a line at the door.  Of course, a cruiseship was in town and they were now located in a perfect location for that.  Many of the guests saw it as soon as they docked at the pier and liked that it was an easy walk across the street.  There were a few locals seated at tables and also at the bar.  It’s fun to eat at a busy location because the air is charged with energy and it’s infectious.      Inde handed each of us a VIP 10% off discount card, and she took another 10% off our total bill, just because she liked us!  (See, it pays to loudly discuss polygamy and other lousy men’s traits at a busy restaurant and scare the wits out of your waiter).    Our total bill came to $62.82 and with a 20% tip, that came to $15 each.  We actually felt generous and left $16 each.

Splasher’s gets 10 stars from us, and a promise to return soon.  They also serve breakfast (yippee), and serve food from 7AM to 9PM and close at 11PM.  They are located at 75-5663 Palani Road, across from the pier and the King Kamehameha Hotel.  Phone number is (808) 326-2212 and visit their website to get a 10% Discount card for yourself:

Gosh – I almost forgot  the wahine’s lua review!    Mei did the honors this day using my camera.  I mean, really, just how much of a photo can you get in a small bathroom?  She did say that it was clean- and that IS  what we’re looking for in any place that we recommend! N’est-ce pas?