Located in Hard Rock Cafe’s  (former) prime Alii Drive digs, one would surmise that a restaurant should make it here based solely on the panoramic ocean view and abundance of parking alone.  Not so, Inspector  Watson.  Hard Rock’s appeal wore thin after awhile, even with the sweeping Kailua Bay sunset vista just across the street.  When the cruise ship landings  evaporated along with our bustling economy, the restaurants that remained  became acutely aware that they would have  to compete by accommodating  a growing breed of tourist who (a) do not care to trek beyond one block of the pier unless it’s worthy; (b) check their iPhones for restaurant menus and reviews; and (c) want something different from what they’ve been feasting (on shipboard) with an added bonus of terrific value for the meal.    Plus, if there is no view offered, the gastronomic offering should be spectacular!After a friend’s recent email extolling the virtues of Humpy’s Great Alaskan Alehouse in Anchorage, my spouse and I headed Makai for an early dinner with the added bonus of a possible ‘green flash’ sunset.  No green flash that evening – and no great dinner either!  We found the food to be mediocre and a bit pricey for the offering.    On September 8th, four Babes headed west for lunch at Humpy’s because at least two reported recent, satisfactory encounters. 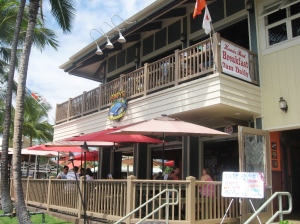 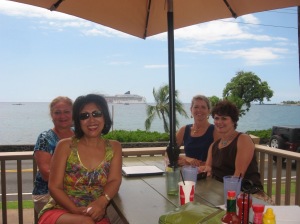 We garnered a table on the lanai downstairs, close to the sand volleyball court (which has not seen action since the closure of Hard Rock), and directly across from <gasp> a visiting cruiseship anchored languorously in the bay.  Frankly, I would have been content to just sit there sipping a tall iced tea while contemplating my good fortune of living in Kona.  At this point, I was not hungry, nor anxious to tempt fate again so soon after my own uneventful dinner experience.

Without much enthusiasm, I followed Cindy and ordered a half-order of the fresh-catch fish taco.  The small cubes of fish (which I can’t recall the name)  marinated in ale and a pittance of beans were enveloped in a soggy flour tortilla and topped with a mountain of shredded cabbage.  Somewhere in that frizee, resided a spoonful of sour cream and guacamole, as noted on the menu.  Bright red and maize colored corn chips overflowed the other half of the plate and an individual cup of salsa arrived separately.  In fact, we both found ourselves  wading through the coarsely chopped cabbage  in order to expose the main ingredient of the serving, which was miniscule by any diner’s standards.  Our youthful and pleasant waitress  happily informed us that the colorful tortilla chips were made in the kitchen – but in fact, we could taste that they were not, because they didn’t hold a candle to Martha’s (Mexican Food) chips, which we can affirm are freshly made, and these chips were slightly stale.  The half order costs $11.99, which I personally found to be exorbitant considering the quality and quantity of this dish.

OMG- it seems that I forgot to photograph the fish taco!  Could it be a subliminal slip of the old brain, or the obnoxious fact that a picture of shredded, white cabbage looks just like – shredded white cabbage?? 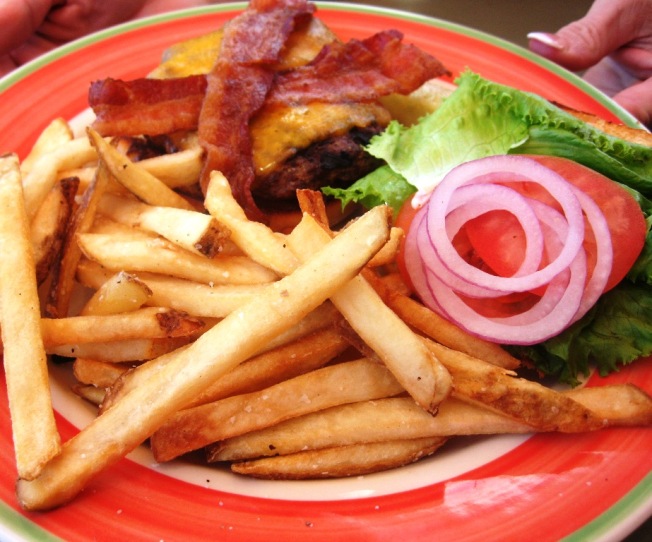 An order of  hamburger and fries for $10.99 was placed before Terri, who remarked on the smaller size of the burger as compared to one she recently enjoyed  at Splasher’s Grill.  The patty was probably less than a quarter pound and quite dry.  Apparently the fries were unremarkable as no one asked for a sample, which is highly unusually for our group.

The one item on the table that got our attention was Mei’s Stone-Baked Sub with shredded BBQ pork, melted cheddar and mozzarella cheeses and topped with crispy onion straws for $10.99.  The stone-baked roll was huge and appeared to be as scrumptious as promised (via menu description).  We each dipped in for a taste of the pork, which was comparable to pulled pork bbq, and had a good flavor.  Mei was pleased with her choice of meal, yet not so enamored with the lunchtime experience. 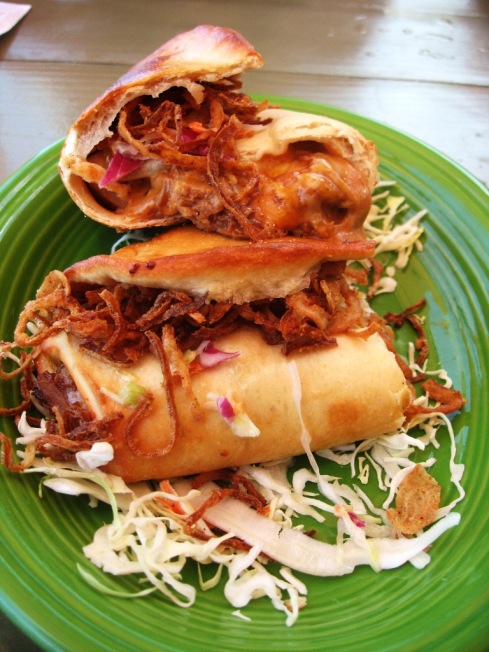 Humpy’s has a terrific location and all the markings of a restaurant that could survive in finicky Kona.  They just need to work on their portions, pricing and food.  Our Mei did not disappoint by voicing exactly how she/we felt.  As I busied myself taking location shots for the blog, Mei  asked the adolescent-looking server for the manager.  He arrived immediately (I didn’t get his name) and asked us if everything was satisfactory.  I did catch the look of surprise that registered on his face as Mei unloaded on him unabashedly and without restraint  (as only someone raised on several continents can do).  To my surprise, he seemed astonished with what he was hearing, and seemed to be struggling with some internal ailment as he tried to remain calm and pleasant.  Mei’s gusto became  infectious as Cindy and Terri chimed in with their personal considerations of what Humpy’s needs to do in order to stay in business. 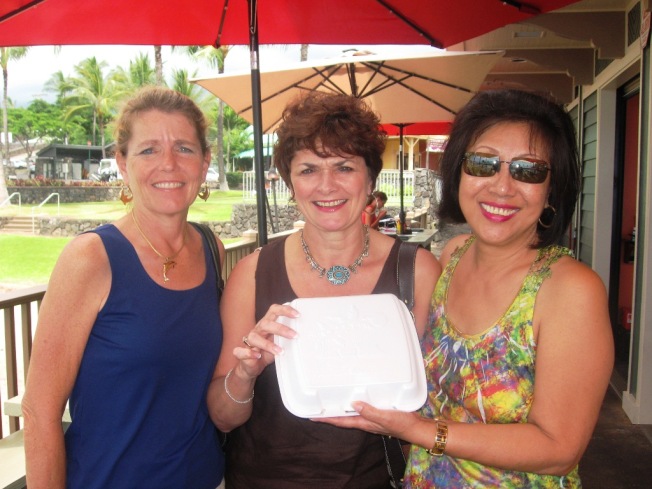 I furiously took notes for our faithful readers.    The gospel according to the girls was simple:  Humpy’s will “die”  (verbatim) given the current economic environment in Kona unless they get a handle on the flavors, portions, and pricing.  There are other eateries in town who recognize that fact and are actively competing for customers.  One illustration  heaped on the now unsettled -looking manager was Splasher’s Grill.  Mei informed him that we recently had a most  satisfactory lunch in a very packed restaurant.  She also noted that his 2-story establishment  was not very crowded on a vogless and sunny day with a cruise ship full of potential clients in plain sight.  Another archetype used was Fish Hopper’s, which Mei explained had opened with less than glowing reviews from diners.   The managers  paid attention, embraced the negative comments and turned things around so that they now have return ‘local’ clientele as well as visiting tourists.  There are many other eateries that have persevered through several depressed climates and were consequently around to enjoy  more prosperous times.  Likewise, I can name several establishments that are no longer in business, simply because they couldn’t justify the expense of  operation or else their product and/or service didn’t ‘cut the mustard’. 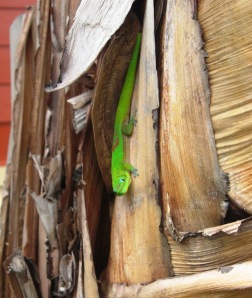 Subsequently, my Alaskan compadre  was shocked to hear about our negative lunchtime experience, claiming that the Anchorage store is so popular that it’s usually SRO at mealtime.  Don’t expect to savor fresh halibut at their Kona location – it’s flash frozen and only featured in  ‘fish and chips’.   They do feature several salmon dishes, and to be fair, an acquaintance revealed that the salmon salad was agreeable.  The bar is apparently popular during ‘happy hour’, with Alaskan brewed ale at the top of the list, and an assortment of deep-fried pupus (appetizers).  But hey – we have our own local brewery in town – and soon, another opening  in Waimea!  Why drink stuff from another State?

Will I visit Humpy’s again?  Probably in the very distant future  –  give them a chance to ‘rethink’ their presentations, and what they are offering for the price tag.  Although there are many ex-pat Alaskans living here, Kona is not Alaska.  We tend to expect a lot when we make the effort to drive down the mountain for a night out.  Pay attention, Humpy’s!

BATHROOM REVIEW:   Hey – their food isn’t tops but they take care of the ladies loo!  As you can see, it’s spic n span, lots of wood and granite – very elegant.  And clean lua = clean kitchen!  Very importanto.  Ok Humpy’s – I’ll cut you some slack – A+ in the clean facility department.   Located at Coconut Grove Marketplace 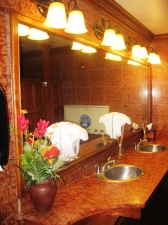 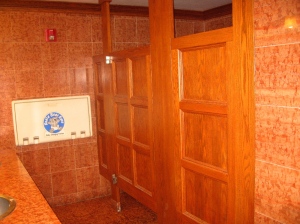