Ok – so this was our first theme dinner, and I know that there are more photos hiding on my old laptop.  If I find them, there are a few very funny ones that need to be posted just in case anyone reading this blog is looking for party ideas with an Italian theme.

To start, some  FAVOLOSO antipasti  was hastily (and artfully) pulled together so that we had  tasty treats while pulling our dinner together.  Sausages, cheese, olives, artichoke hearts, bruschetta, peppers – darn it!  Somewhere there IS a photo!

Some of the Babes brought their signature dishes, such as Rachel’s “mama mia” Italian Sausage and Peppers entree served with penne pasta.  The Insalata Caprese was put together on site with fresh basil from the garden, and locally grown roma’s.  The colors were so beautiful and the smell of fresh basil and tomato drizzled with the balsamic dressing were intoxicating.

Some of the other dishes were Pork Roast with Roasted Fennel and Apricots, homemade Bolognese sauce, grilled garlicky eggplants from the garden, Caponata dip, fresh olive Ciabatta bread, and of course, freshly made pasta!  Joann contributed her (or was it her husband’s?) infamous biscotti!

Dinner was on the lanai facing the sunset – and the table was adorned with fresh rosemary from the garden, lemons and candles.  Yes, there is a photo, but not at my fingertips as of this writing.

It was almost comical watching the assembly line of pasta making, and I do have some photos hidden away on a hard drive (worth retrieving).  The Kitchen Aide was working doubly hard that evening, doing some mixing, then some cutting.  Some of the gals wanted to try and mix their own pasta dough by hand on the cutting board – there was flour everywhere!  We dried the pasta on my wooden clothes rack!  It was fun, and there is no better texture or flavor than homemade pasta.  Of course, De Cecco’s isn’t too bad in a pinch, and frankly, I keep a few boxes in the freezer.

Everyone brought their favorite Italian wine or dessert drink – the site of all those empty bottles on the counter the next morning roused me more than a pot of coffee.  At the end of the evening, we formed a conga line that snaked through the house as we waved wooden spoons, sang and danced to Bette Midler’s “Hey Mambo, Mambo Italiano”.  I think Dean Martin also had a version in there.  Rumour has it that there is a viral video hiding somewhere, waiting for it’s debut on You Tube.

Caprese salad and then some 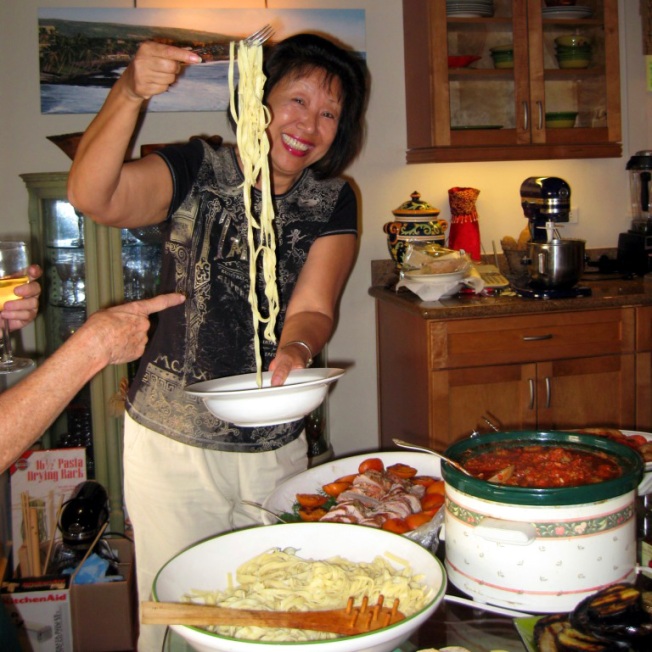 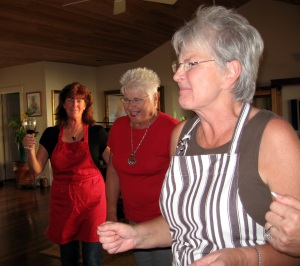