We’ve fallen witness to a plethora of events both personal and global, as time seemed to travel “faster than a speeding bullet”, and in a few cases, smacking us right between the eyes with occurrences that robbed us of our collective breath.

2015 will remain memorable for the Kona Babes in  many ways, as we continue to unite in the harmony of shared repasts, while attempting to dissect and justify certain incidents that remain fresh in our minds. Trust me, our audience does not want to tag along on the latter part of that  journey, and instead, we move towards the integral  reason our Babes journal was initiated and try to rehash some of our memorable meals from this past year.

Many of our readers check in for our take on various restaurants in West Hawaii, and because Kona is a small village and eating places are limited, we tend to return to our favorites. Therefore…. here is a quick, rather frothy recap of some of the eateries visited during this past year, with photos, if I bothered to take any!

Okay – so this is a revisit. Undoubtedly, it’s a small chain restaurant that just so happens to enjoy a fabulous view of the seawall on Alii Drive and Kailua Pier, plus an odd assortment of walkers, joggers, tourists, at times looking rather lost and bewildered by the humidity, kids fishing off the wall, dogs, the occasional pumped up hot rod, local kids piled into the back of pickups and cruising, delivery trucks servicing Alii Drive businesses, et al.

Breakfast has become the meal of choice at Fishhoppers because a streetside table is almost always guaranteed if we don’t surpass a count of 5. Among our faves: Fresh fruit, eggs benny with house made hollandaise, loco moco’s, kalua pork omelets, and the sumptuous Huevos Rancheros, which is the house specialty. I looked in the busy kitchen one morning and saw a Mexican chef at the grill, who smiled at me and winked, as he applied a huge dollop of salsa fresco on a pair of jiggling sunnyside up eggs. And folks – even though the Kona Babes rarely do cocktails at our breakfasts and lunches, I can personally attest to the fact that their spicy Bloody Mary’s are top drawer. One of the other Babes speaks highly of the sparkling Mimosas.

It’s a repeat for us – and should be for you too! https://www.facebook.com/FishHopperKona

Nestled at the back end of Alii Sunset Plaza, Fumi’s describes it’s food as “Korean-Japanese Asian Fusion dishes with a local flair on the traditional”. That’s the best way to put it as far as I am concerned. Owned and operated by Chef Ronnie Ow, son of the comely Fumi Teshima, of the famed Teshima Restaurant family in Kainaliu, this hidden little gem comes highly recommended if you want to sink your tastebuds into truly flavorful Asian-Kona inspired cuisine.

Everything that we have eaten at lunch has been worthy of follow up visits. Personally, I am a fan of anything with noodles, and their udon does not disappoint. Flavorful housemade broth features rich ‘umami’ essence without overpowering the thick noodles, fishcake, vegetables and poached egg. I could eat that daily. Sometime this year, I plan to visit Fumi’s to check out their breakfast offerings. Fried Rice Omelet? How can one go wrong?? 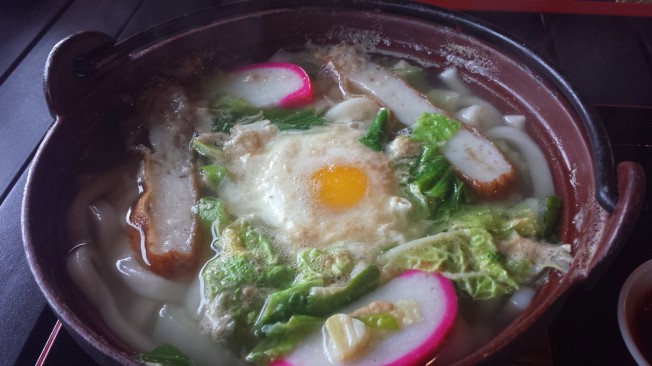 Now serving breakfast, lunch and dinner, Fumi’s also offers catering for any kind of event you can dream up. Check out their website; peruse our photos, and take our word for it – go local and visit Fumi’s. http://www.fumiskitchenkona.com/ and they are on facebook too! https://www.facebook.com/FumisKitchen/timeline

This place has some serious history in the ranching town of Waimea, home of Parker Ranch. It originally started out as the rustic and cowboy paddock, Red Water Café, then morphed into the elegant Edelweiss Restaurant for many years. One day, after a driveby, I saw the Fujimama sign and bamboo fenced patio. Could this be the same sushi/Japanese fusion spot from Kona? Fujimama’s tried hard  at that location, however  it wasn’t quite Waimea fodder, so after another trip upcountry plus swiveled neck glance out the car window, I saw the Red Water Café sign again. Déjà vu!

Retaining some of the Fujimama décor and a couple of menu items, this eclectic restaurant has quickly gained a following from all parts of Hawaii island, as well as returning island visitors from afar. Their Facebook page indicates that you will enjoy a “multicultural dining experience” and that is a great indication to me that I will check it out and probably be a return guest.

By now, I have visited Red Water several times, always during dinner hour, and have managed to try various items from their diverse and imaginative menu and I have not yet been disappointed by any of their offerings.

The Wok Meals are popular at full or half orders, and we can personally attest to the tastiness of the Lilikoi Chicken Yellow Curry Wok, and the Spicy Basil & Shrimp Fried Rice Wok.

As soon as you sit, a dish of spicy edamame appears as you survey the menu. Go for the poisson cru appetizer, if available. You won’t be sorry!!
Make the drive to cattle country – you will appreciate the few fine restaurant offerings – Red Water, among them.

Located in the Kona Coast Shopping Center, this Japanese influenced eatery features individual burners, set into each tabletop, so that restaurant guests can cook their own selection of menu items at their leisure – Shabu Shabu. The difference between Sukiyaki and Shabu Shabu is that the former is less savory and slightly sweeter.

Mei had been to this establishment before, and as only Mei can, urged me to follow her downtown for a late lunch at Genki. Not to be confused with Genki Sushi, this Genki does not have any sushi on the menu. When we walked in the door, the owner, waitress, and probably the cook, all knew Mei and greeted her with great zeal, normally reserved, I would guess, for visiting royalty. Even though Shabu Shabu is a Japanese cuisine, they all seemed to speak some dialect of Chinese that Mei was well versed in. For five minutes, the foreign patois sailed over my head as I perused the glossy menu, trying to appear cool and knowledgeable. 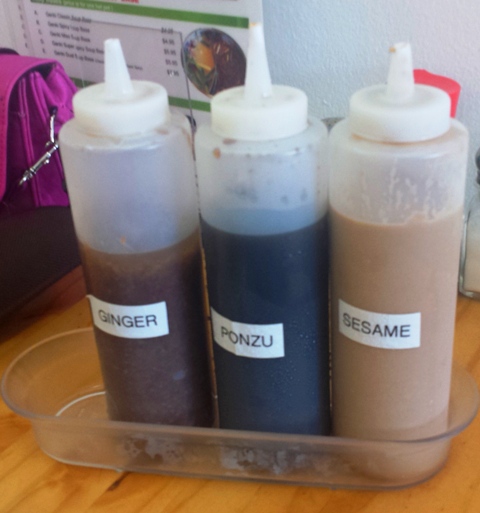 The word Shabu Shabu is an onomatopoeia, which suggests the sound emanated by the thinly sliced beef as it’s stirred in the cooking broth or water. Of course I resigned myself to the passenger seat on this lunch excursion, letting the driver, Mei, select our choices gleaned from her past experiences. We shared a pork set, which had more than enough for both of us. The photos speak for themselves. It was very filling!! 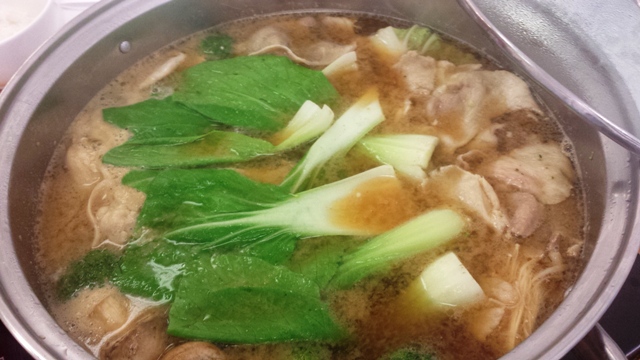 Get down to Genki Shabu Shabu for lunch or dinner and the very affable Ying will take good care of you! 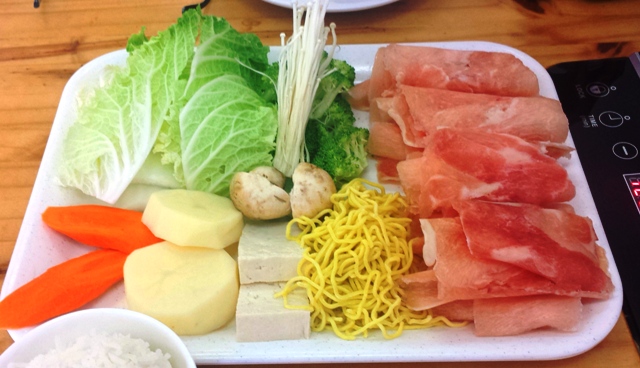 Remember the old Kailua Candy Co location on the Kaiwi and Kuakini corner across from West Hawaii Today? It’s now Umeke’s Fishmarket, a hotspot of poke seeking purists merged with area businessmen, lunching girlfriends, wide-eyed tourists fresh off the boat wanting to eat with the locals, and customers just wanting some fresh Kona seafood for lunch or dinner.

Umeke’s features daily fresh seafood offerings, a growing menu of imaginative items, such as the “Poke Bombs”; a coupling of varied styles of fresh Poke stuffed into four individual cone style sushi that won the hearts and minds of the judges at the Sam Choy’s Poke Contest. I can ascertain that it will certainly win mine and I can’t wait to try it!

The restaurant itself is all hard surfaces, so it’s a bit noisy and difficult to carry on an intimate conversation at your own table. The other side of the coin is that all the noise contributes to the Type A personality of Umeke’s and you feel like you are at a big party. Anyway, who cares – just enjoy the food. Each bowl comes with your selection of salad offerings and a choice of starch (white, brown rice or quinoa). I have been there three times with the Babes and other friends (yes, I do have other acquaintances), and enjoyed my experience thoroughly.

Umeke’s also has a kiosk at Lanihau Center, in front of Long’s Drugs, and a poke take out counter on the corner of Kuakini and Hualalai Rd, across from the 76 gas station.

If you get there before I do and try the Poke Bomb, give me your review!

When Amici’s occupied the front half of the Aloha Theater building in Kainaliu, we did lunch a few times and enjoyed it thoroughly. Due largely to the personable Chef and Owner, Giovanni Saffioti, we followed when he relocated to Kona, next door to Umeke’s in the Kuakini Center.

Make no mistake – it’s blazing hot in downtown Kona most of the year, and if you don’t have a decent air conditioning system, you will think you are sweating it out in monsoon riddled Thailand. Fortunately, Kona’s mild winters allow for lanai seating under shade, which is available at Amici’s. During the summer, Gio’s a/c system tries valiantly to keep up with the large chillers doing their job next door at Umeke’s, but it does tend to be a bit warm indoors and unbearable on the lanai. Fortunately, the food is good enough that we arrive as soon as they open the door for the earliest lunch seating. Evening meals are probably a better idea from August through September when the cooling system doesn’t have to struggle as hard.

The Babes have become regular customers of Amici’s and enjoy the “authentic Italian cuisine plus modern fusion blends”. When we enter the front door, they greet us warmly, and it feels like we’re entering their home. The menu offers a wide array of dishes that would appeal to anyone and prices are reasonable too! Wednesdays and Saturday evenings feature the talented stylings of pianist Lee Stewart. Happy Hour is Monday through Saturday from 4:30 to 6:00 PM with a special bar menu. 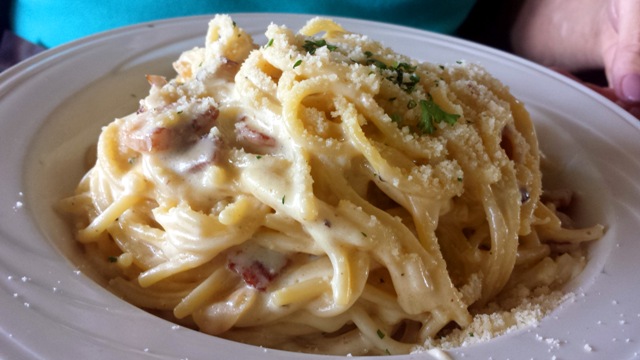 So people – the food is good, the atmosphere inviting. Trek on down to the old Industrial area and tell Giovanni that the Kona Babes sent you. If you don’t see anyting on the menu that appeals, ask him – if time permits, he’ll customize. That’s what we love about it!

Most of the other eateries that we frequented this past year were mostly repeats that you are familiar with if you read our pages: Hokulia (when Rachel is in town), Shiono’s, Jackie Rey’s, Holuakoa Café, Bubba Gump’s, Royal Kona, et al. There are a couple of places in town that I will definitely try to get to soon, even though a few of the other Babes have already been there:

Akule Supply (the old Keauhou Yacht Club on the bay); Habaneros (the old Bombadil’s); Strawberry Patch ; fresh poke and seafood at Sun Dried Specialties in Kealakekua, and many more. I am curious to try the Shrimp Wagon that appears once a week at the 76 Union station on Kuakini and Hualalai. I’ve heard only good things so I’m eager. There is also a new bakery, Holy Donuts, in Kona Marketplace off Alii Drive where the festively decorated donuts are about the size of manhole covers – just kidding, but they do look colossal! 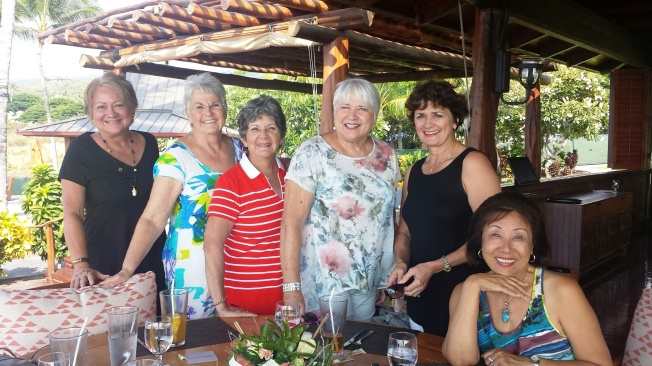 I’m at the end of my literary rope regarding food blogging for 2015. In summary, the Kona Babes enjoy eating out whenever we can, but the truth of it is that we appreciate our special bond of friendship and love during these gatherings. Over the years our group has thinned out geographically, however the digital age has allowed us to remain in touch, sharing in our happiness, accomplishments, grief and sorrow.

We look forward to whatever joys 2016 brings us and send our best wishes for the same to all of you! 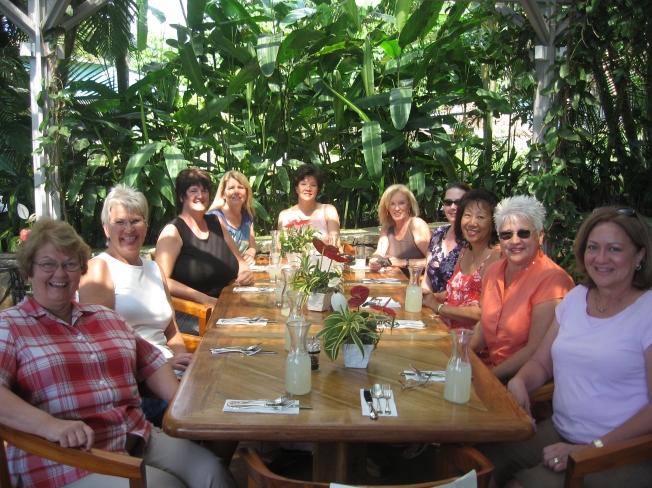