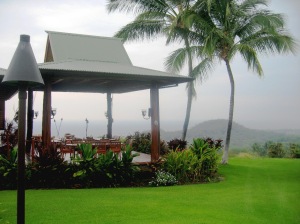 It’s unbelievable, but here we are again at what I perceive to be the most breathtakingly beautiful location in Hawaii for Sunday brunch.   The views are incredible, and it starts the moment you drive through the guard shack just right of the new Ali’i Parkway Mauka junction.

Emerald green fairways meander down  the mountainside directed  towards  the spectacular rugged coastline.  A modicum  of homes, finished and not, pop out unexpectedly here and there throughout the project.   It appears to me  that there is not one soul on the golf course today as I head towards the Pavilion, slowing down at designated golf cart crossings.  Despite all the dramatic controversy  attached to this place, I would buy a lot (if I won a powerball lottery in some other state) and build the smallest home allowable (treehouse?)  just so I could gaze at the surroundings  on a daily basis.   But since there is no jackpot expected in my future, I am content to visit whenever invited.

Nathan brought a round of frosty coco-limeade beverages  to the table as the girls excitedly discussed the menu.  Rachel was having an early dinner this evening and  proclaimed  that she would be eating lightly today.  That is, until the specials were revealed:

Open-faced Meat Loaf sandwich,  prepared  by combining roasted  rib eye and pork shoulder, served on   grilled sourdough toast, topped with creamy mashed potatoes, wilted greens and mushroom gravy.  Nathan explained to us that the rib eye steak trimmings as well as the pork shoulder, which contains an ample amount of marbling,  were used  resulting in a tender and moist gourmet meat loaf.

Rachel’s protests of a light meal went out the window as she succumbed, along with Carolyn and Terri.

I accepted Carolyn’s invitation to sample her dish.  On appearance, it reminded me of those open-faced hot turkey and roast beef sandwiches that we used to eat in the 50’s.  The difference being, of course, the caliber of meat used, presentation, and flavor.  Today’s  cloud of mashed potato was  light years from the instant mash of yesteryear, and the savory mushroom gravy in no way resembled the  fragrance or taste  of the widely employed   “kitchen bouquet” variety of brown gravy found in my grandmother’s kitchen pantry.   After  contemplatively rolling  the small sampling around my palate, I questioned my own brunch pick. 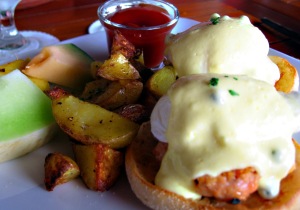 When my Salmon Eggs Benedict arrived, I knew that I had chosen wisely!  The eggs were poached correctly in that the whites were fluffy and tender, yet the golden yolk remained soft.  I have had too many poached eggs in the past where the whites were as runny as the yolks.  Happily, the chef also knows his hollandaise!  Creamy yet light as air – not overwhelming.  I felt that it could’ve used a bit more lemon for my tastes, and Tina suggested I use the lemon slice in my water glass.  A short squeeze highlighted the  slight tang that I hoped for.  Capers dotted the sauce – again, not overwhelming.  The salmon patty was denser than expected, but tasty in an herbal way, providing the salty edge that a benedict needs.  I was pleased to see that they lightly  toasted their English muffins.   Tina and Cindy agreed with me and also remarked on the striking  color presentation served  with roasted potatoes and fruit .  Poached eggs can be a wonderful accompaniment to many other dishes  (such as  steamed asparagus sautéed in garlic butter – YUM).

Mei savored  her selection of  Lobster Omelet with Gruyere cheese.  Once again, the chef is a master in the egg department (French Laundry  alumni??).  The omelet appeared to be soft, tender, full of fresh lobster, mushrooms, shallot  and gruyere – and most important – not overcooked.  On her plate (and on mine) were a generous helping of roasted and seasoned potatoes.  These heavenly spuds  are  figuratively to die for – crispy exterior and creamy interior.  In fact, our table erupted in a cacophony of “ode to roast potahto”.  Fortunately, we were the only souls around that morning so we could be as raucous as we dared. 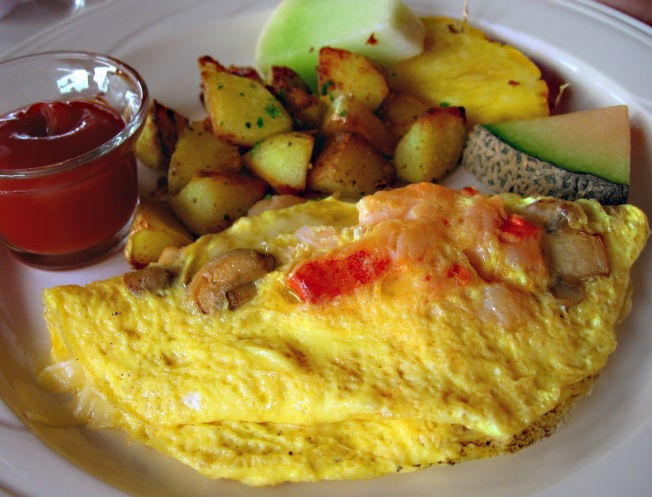 Out of the corner of my eye, Tina summoned Nathan to her side and whispered something barely audible.  Moments later, he reappeared with her Mimosa.  We all had a cumulative look on our face – this is a Sunday brunch – HELLO – champagne??  I think at that moment, most of us were thinking about ordering one for ourselves, but we were so engrossed in our food and conversation, and frankly had filled up on the coco-limeade refills, that it was too late for us to reconsider.

Many topics were discussed today, including the upcoming chick-escape flick, “Eat, Pray, Love” starring Julia Roberts.  A few agreed that we hoped the movie would be more engaging than the book, and that we are confident that Julia will pull it off, along with provocative co-star Javier Bardem (Love in the Time of Cholera).   We also conferred on the book “The Girl with the Dragon Tattoo” by Stieg Larsson – a must read, as well two other  novels in his Millennium Trilogy.

Also on our scope is the preparation of a list of places to dine and  adventures to share with our reading audience.  The Kona Babes traditionally celebrate holidays and events  together whenever possible,  such as   Christmas Cookie Exchange, New Year’s Eve, Fourth of July, Thanksgiving and Superbowl,  plus an annual potluck themed  get-together.  2011’s tentative proposal  – 50’s Diner to be held in January, when most of the Babes are in residence.

Earlier, we had all agreed  to share an order of Strawberry Short Cake French Toast as a dessert offering.  By the end of our meal, that deliberation all but disappeared and no more mention of satisfying our collective sweet tooth surfaced.  Ever the clairvoyant, Nathan likewise  presented us  with our tabs, remarking that a sugar rush didn’t seem inevitable. 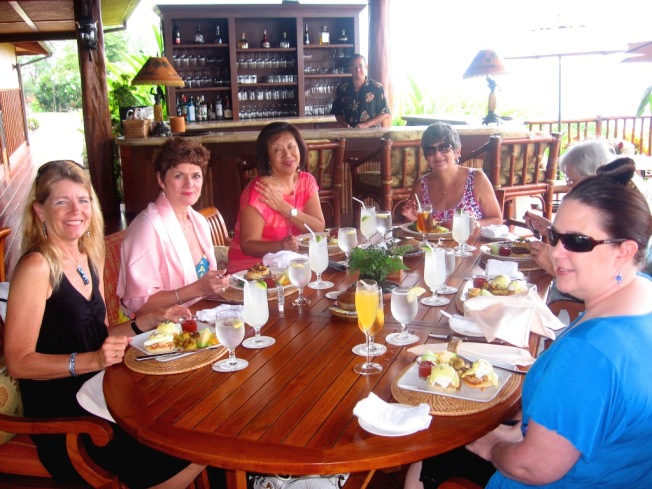 Rachel is in town for another week so there may be another opportunity to commune  at one of our most treasured  spots; but if not, we always have our fond remembrances of past lunches, and she will return – this time with a promise of new adventure:  a cultural tour of Hokuli’a, with all it’s history, ancient caves, trails, lush flora and fauna.

And there’s always Nathan – our knowledgeable and affable host, who shared a tip for those interested to see what we’re blogging about:  Hokuli’a frequently hosts charity golf tournaments that are open to non-resident players, and also donates Gift Certificates for meals at The Pavilion to local non-profits.  So if you see those GC’s on a silent auction table – take a big Babes hint:  BID ON IT!!!  You won’t be disappointed! 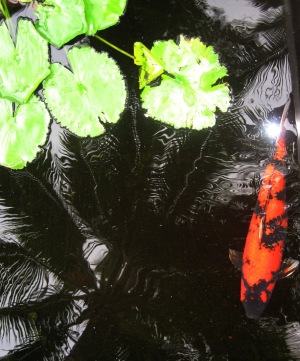 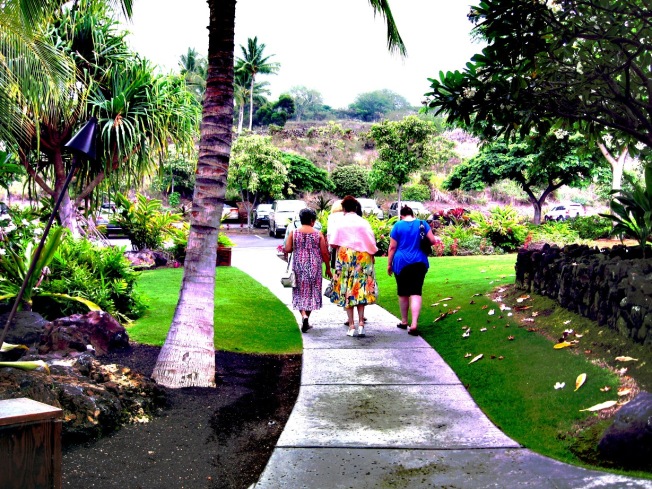